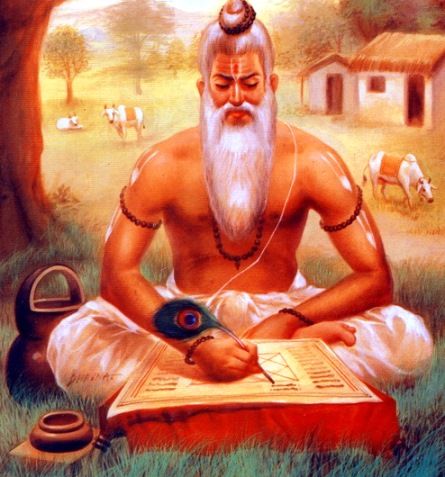 Jyotish – also known to be one of the Vedangas (limb of Vedas – total 6) as eyes of the Vedas without which one cannot make sense of Vedas updeshas.   Looking at it from Vedic perspective how this divine knowledge (Vidya) has made its advent on mrityulok (mortal world), probably we will have to start from the beginning.

As per Vedic literature (Shrimad Bhagavatam) Brahma, Vishnu and Mahesh who are believed to be managing this entire Universe/Metaverse or beyond who knows?  Brahma – The creator, Vishnu – The Preserver and Mahesh – The ultimate destroyer.

Each of them are known to be Trikaldarshi- one who knows  Bhoot (Past) , Bhavishya(Future) and Vartman(Present) which allows us to think that  each of them has/had  knowledge of Vedic astrology too, however formally it is almighty Param(highest stature) Pitah(father) Brahma who took the responsibility  to spread the divine sacred knowledge or say who built the constitution for the Prithvilok(Planet earth) and created 4 Vedas – Samved , Rugved, Atharved , Yajurved and also passed on all his teaching to his children.

Ved Muni Narad (son of Brahma) and his siblings knowns as Sankadi rishi also known to be great scholars in astrology and have taught this divine science to many sages.

To talk little further, as per Narad Puran (there are 18 such Vedic Puran) – Narad Rishi received the knowledge of Jyotish from Sanandan  one of the Sankadi rishis (total they were 4)  who all chose to be in balya avastha (Child Stage) forever and kept roaming in different realm to spread the ultimate truth , I am putting up their names for our knowledge sake

There are also versions In Vedic literature which mentions that following eighteen jyotish parvartaks  or in other words the great originators/promotors of jyotish were practicing this divine science since the inception, who all  then passed on this sacred vedic sutras to their next generations and so and so forth and finally it has also managed to reach to me as well in some form somehow 😊.

Out of these 18, In particular,  Parashara the promoter of Jyotish famously knowns for writing the Brihad Parashara Hora Shastra , was the grandson and disciple of Maharishi Vashishta who not only was one of the Saptarishis but also the guru of Lord Rama, Vedvyas was his son  who has written the great Mahabharata , Srimad Bhagvatam and Bhagvat Gita. Jaimini was son of Vedvyasa and grandson of Parashara who wrote cryptic Jaimini sutras(Updesha)

Now the important thing to note is,  in ancient times Vedic literature was taught in gurukuls (guru ashram) so everyone who learnt in Vedic age knew jyotish and in those times since  mode of teaching was always verbal there are chances that some of the teaching might have been lost or got corrupted while being passed on to one generation to the next (lot of invasions happened, many generations got wiped out , vedic literature were lost and destroyed )  and then later when it took the form on paper or any other printed media  it has never managed to be in 100% purity/original, hence the accuracy of prediction went downhill and probably that is why astrology has not gained that much acceptance or still believed to be pseudo-science in many part of the world. However, lot of good work is being done by various scholars in last couple of centuries and this ancient Vedanga is slowly getting its shine back.

Open chat
Need Help
or scan the code
Hello 👋
Can we help you?